I want the “Bern”

To be progressives- in the way political parties see it- is to be the ones who do the thing that has yet to be done. If it isn’t obvious to you when put so bluntly, here’s an example; or two.

During the 2008 democratic primary race, something unimaginable happened. It was a republican nightmare, something even Nixon couldn’t plan for: both candidates represented a minority group.

Cue the dissonant cellos and violins, smash the cymbals, shoot the conductor!

Call back the troops, shut the windows and doors, barricade the exits, turn off all electrical devices: its Code red in the Republican war room!

Such a move by the democrats forced the hand of the Republican establishment. And we saw the move one night after a certain junior senator from Chicago began building momentum. The same Junior Senator, who had slain the female candidate- and also the former beloved first lady-in a brutal campaign, earning the right to represent the democratic parties’ interests in the big show (as some call it,) the final knockout round: the presidential election.

The move: Sarah Palin sharing the podium with John McCain.

To counter the Junior Senator, the Republican’s move was simple: run a woman on the presidential ticket; however, this was not for the big seat, but the one perched just behind the speaker’s chair, the big “VP.”

We all know how that turned out, and if you don’t, read a newspaper once in a while to find out; life’s fun in isolation, but not knowing who the president is?

What exactly were Republicans strategizing in their cozy war room? The future. Thinking one step ahead your opponent is a key in politics – at least that’s what political scientists say, and they may eat more than their own words if Trump takes it, but, that’s another story…

The Repub’s didn’t predict Trumps very erratic political campaign, or the jokes, because if they did I wouldn’t be writing right now. They predicted Hilary Clinton’s campaign strategy, and the thing that most of her supporters cling to; it is in the imagination of a generation of woman she’s inspired; a certain moment: her victory speech.

Much like the way African Americans felt when Obama gave his fateful speech announcing the great change in America, it was the speech that many people wanted Clinton to give; a feeling these intelligent men and women wanted to feel.

After four years, many have grown tired of false idolization. We no longer want the “first,” but the best. We want a true candidate, whose record is clean, consistent; someone we can trust.

And time in politics forces you to cling to power. And in clinging, your desire only grows, and it consumes you, makes you in its image. And if the power is corrupt, then so are you.

Bernie’s record is clean, authentic, seemingly incorruptible, and that’s what we want; that’s what I want.

And why would you want a candidate whose strategy was replicated by a bunch of modern day republicans?

Are we that easy? 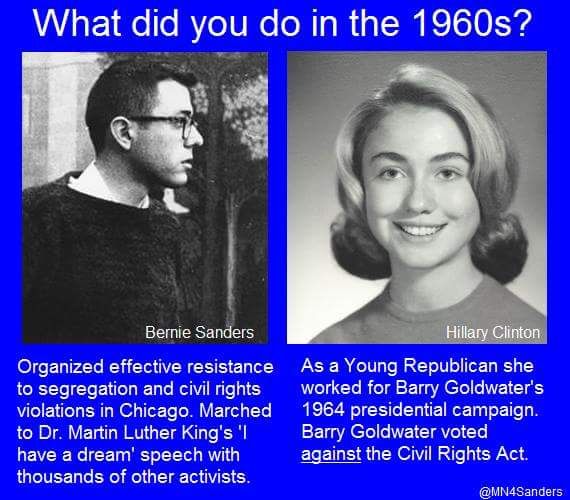